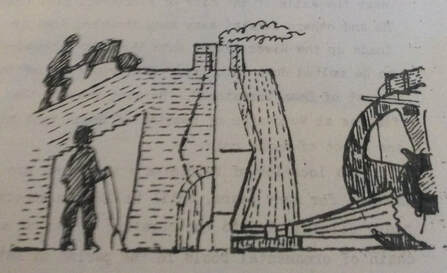 ​From Notes by Spencer Comley
​
Andrew Yarranton (born at Larford), an outstanding seventeenth century pioneer in such diverse fields as agriculture, national economy and the construction of canals, records in the year 1652, “I entered upon ironworks and pli’d them several years.  In a later volume of his standard book, probably written in 1680, Yarranton makes one of his characters say, “About 28 years since Mr. Yarranton found out a vast quantity of Roman cinders near the walls of the city of Worcester, from whence he and others carried away many thousand tons or loads up the River Severn unto their iron-foundry, to be melted down into iron, with a mixture of the Forest of Dean ironstone”.   He also records the finding at Worcester of hearths of Roman foot blasts and a pot of Roman coin.

The location of Yarranton’s ironworks was unknown for many years, until in 1924 an abnormally heavy rainfall led to the bursting of two of a chain of ornamental pools in the parish of Astley.

The movement of part of the dam of the largest pool revealed the base of a blast furnace which was soon recognised as such and was described in an admirable paper by Cantrill and Wright in 1929 - “It makes a very strong case for the identification of this furnace with that erected by Yarranton”.

The known facts of Yarranton’s life suggest that he had abandoned the project before the restoration in 1660.   There are remains of a series of flash-locks constructed on Dick Brook by Yarranton to enable barges loaded with iron slag at Worcester to pass up the river to the furnace.

In 1984, three hundred years after his death, an iron plaque was erected to the memory of Andrew Yaarranton in the larch plantation above Astley Mill.