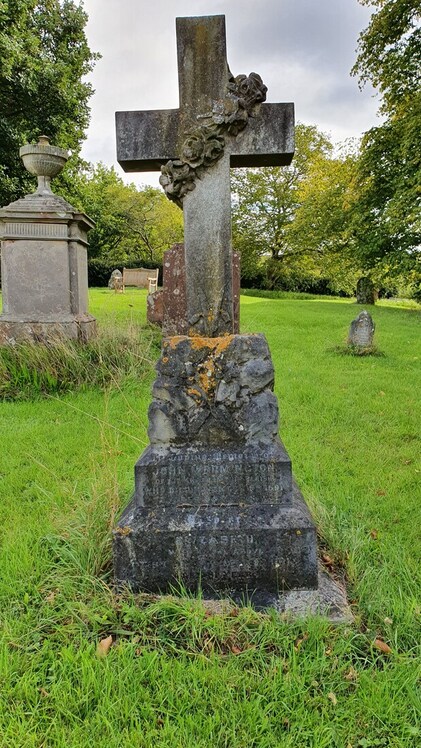 Also of Charles Their son
Who died April 6th 1893
aged 40
John Wormington managed the Shrawley Farm and Game Account until 1885 (age 76). His parents were Robert and Mary; they lived in The Knapp and when Robert died in 1832, Mary continued there as head of household giving her occupation as farmer.  In 1846-1848 the fall of underwood had been let to Mr Wormington and John Wormington was the contact person for sales of wood from the falls of 1860, 1863 and 1864.10
​
Shrawley Baptisms Page pp
John was baptised 28 March 1808; he married Elizabeth Little in St Peter’s Church, Worcester 19 January 1830.baptism
Shrawley Marriages pp
Marriage
1841 Census Page 19
In June 1841 at Bopitt now Bowpit Farm, John Wormington (30) with Elizabeth (30) Henry (10) Walter (7) Harriot (1). John was the Registrar


27 th Sept 1860 COURT held at Lenchford Inn home of FANNY THRUPP
Jurors JOHN BEACH JOHN VERNON
SAM FORD MARY WEBB
FRANCIS ROBERT ROBERTS died 1848 seized of copyhold messuage.He left no  Will.ELIZABETH ROBERTS spinster and MARY BAKER,wife of Thomas Baker of  Erdington Bham, his 2 sisters were his heirs customary and should have  beenadmitted tenants to hi s property.ELIZABETH ROBERTS died unmarried and  intestate without being admitted tenant therefore MARY BAKER became entitled to  the whole property.
By an Indenture madeon 27th Sept 1860 between William Wright of Lower Henwick  Rd in Worcester,timber merchant,as Trustee appointed by the Hih Court of Chancery  on 14th Jan 1860 for carrying out Trusts contained in the Will of ROBERT  WORMINGTON formerly of HAMPSTALLS in Astley,yeoman deceased of the 1st part  Edward Richmond Nicholas of Bewdley Gent of 2nd part, Robert Acton Pardoe of  Bewdlwy Gent and William Croyden of Hillhampton of 3rd part,Thomas Baker of  Eardington farmer and Mary his wife of 4th part,Richard Gill of Catchems End Gent of  5th part and JOHN WORMINGTON of Shrawley farmer of 6th part.After reciring that at  the Court Baron 29th Dec 1828 ROBERT WORMINGTON ,since deceased.but then a  Customary tenant and MARY,his wife,in consideration of £300 then paid by EDWARD  RICHMOND NICHOLAS to ROBERT WORMINGTON surrendered into the hands of the  Lord all the tenement and garden with the piece of land called THE NAP, and THE  THREE ACRES, then being part of and part of premises HILL TOP or MILLEN GROUND  to which ROBERT WORMINGTON had been admitted 16th Nov 1809 to use of
EDWARD RICHMOND NICHOLS and heirs subject to proviso for redemption thereof  on payment by ROBERT WORMINGTON the sum of £300 plus interest due. EDWARD RICHMOND NICHOLAS was admitted tenant 0f said Copyhold 29th Dec  1828.At the same Court ROBERT WORMINGTON was admitted tenant on purchase of  several pieces of Copyhold land then late in the occupation of MARY TYLER  containing 5 acres situated within the Manor of Shrawley and then in the occupation  of SAMUEL FORD ( except a small plot containing 9 perches next to a lane leading to  HILL TOP, which was then staked off from remainder of land.
Then to JOHN OVERTON then to FRANCIS ROBERT ROBERTSON
MARY BAKER admitted to SLADE HOLE adjoining above premises containing 4 acres  in the occupation of MARY WORMINGTON widow deceased copyhold in late  occupation of MARY TAYLOR then SAMUEL FORD except 9 perches situated next to  the lane from said lands to HILL TOP and FRANCIS ROBERT ROBERTSON admitted  tenant 1828
1860 MARY BAKER surrendered SLADE HOLE to JOHN WORMINGTON £400 as  ROBERT WORMINGTON deceased. JOHN WORMINGTON admitted tenant.