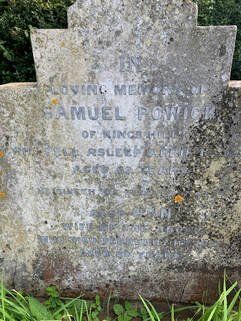 As a gamekeeper he worked under the management of John Wormington until sometime between 1885 and 1888. In 1890 he took over managing the Shrawley farm account as well as the gamekeeping account until his death in 1895.

At the age of 19, four weeks before he married Ann, Samuel came up before the magistrates in the Hundred House Petty Sessions on 6 October 1852 and was fined five shillings for poaching. With Job Taylor and Isaac Edwards he was convicted of killing a hare in a meadow owned by Lord Ward (in Holt parish) without license and without authority. (Job had been married to Samuel’s sister Maria, who had just died in 1851)
In 1859 Samuel was shot by a poacher while on night watch for the Vernon Estate

THE SUMMER ASSIZES: ATTEMPTED MURDER AT SHRAWLEY
John Bingley, 46, labourer and James Smith, 33, labourer, were indicted for having entered  Shrawley Wood, the property of the late Thomas Bowater Vernon, Esq., for the purpose of destroying game. There were six separate counts in the indictment, the most serious of which was maliciously wounding a gamekeeper named Samuel Powick, with intent to murder him. Mr. Powell for the prosecution, the prisoners were undefended.

Samuel Powick said: I was employed to watch the game in Shrawley Wood, on Jan. 15 1859, with John Bond and Thomas Brown. I was stationed about three o’clock in the morning near Mr. Beech’s [Bridge Farm by Glazenbrook Bridge]. I heard a shot in the direction of Redding Bridge which is a foot road near a ride in the woods. We advanced towards the bridge [along the broad track past the forge beside Dick Brook], and I stationed myself at a gate, and the others concealed themselves in the hedge.

I heard two of the shots and a pheasant cry. While there three men came down the ride and a dog came to the gate and returned to the men, when they went away, and I followed. I ran after them, and was closing upon them, when they turned round and the man I supposed to be Bingley fired at me without saying a word.
He was ten to twelve yards off.

Upon the man turning round, I saw him put the gun to his shoulder and point it at me. I instantly leaned upon my right side and received the charge in my left arm and breast. I cried out, “Oh, Lord, lads, I am shot; but come on, and we will have them now” I went on, and Massey turned round and struck at me with the gun-stock and we closed and fell to the ground. Their dog also got upon me.

My butties then came up and struck Massey. The other two men were standing in the road a few yards off. When I got up they were shifted a few yards further. Brown said “Come on lads, and we’ll have them now”. Smith and Bingley then ran away.

We then took Massey into custody. He was not the man who fired the shot. Bingley appeared to have a slop on; the other was dressed in dark clothes. It was a moonlight night, but was rather dark in the wood. I did not know who the men were. They were strangers to me. I was laid up five weeks from the effect of the injuries.

George Massey said, I was convicted in March 1859, for being out poaching in Shrawley Wood with two other men. They were the prisoners. I had been in their company in a public-house called the “Severn Trow” before. Bingley had on a check smock and a black billycock. The other had a blue jacket on the top of a white slop. There was one gun and a barrel of a gun amongst us. Bingley had the gun and I had the barrel. Smith had no weapon. It was about one o’clock when we went into the wood. We went to shoot pheasants. About three o’clock we were going down the ride when the gate opened and Powick came up. Bingley fired at him without a word passing on either side. I was afterwards knocked down and beaten by them as long as they thought proper, and then took into custody and tried for the offence, when I pleaded guilty.

By the prisoner Smith: Was there anything mentioned about any insult before. No

By the Judge: There was no agreement about fighting if we were stopped. Bingley said he did not think that Massey’s evidence ought to be taken as he had been three times convicted. Massey admitted having been convicted twice.

Joseph Higgins said: I am employed in the goods department of the West Midlands Railway. I kept the Severn Trow at Stourport. Massey and the two prisoners came to my house between eight and nine o’clock on the 15th January 1859. Bingley had a blue Guernsey frock on, and Smith wore a blue jacket.

Mr Warden, surgeon, Stourport, said that he examined Powick, and there were 28 shots in his head and arm, and 12 in his chest. He extracted 11 from the chest, but those in the arm were too deeply seated. Powick was laid up for five or six weeks afterwards. It was No 5 shot, such as is used for shooting partridges.

John Bond said: I was one of the watchers on the night in question. I saw the man that fired a gun using the ramrod as if he was re-loading and ramming the charge. The other man who was standing by his side said “Be sharp and load, and put a charge into that b--------”

By Smith: Massey had the powder and shot, but we did not know that at the time.

Smith, in his defence, admitted poaching, but denied that he had spoken the words imputed to him; in fact he was a distance away from Bingley at the time the shot was fired.

Bingley also said that Smith was a distance from him at the time, and did not use the words in question. He affirmed that the gun went off by accident, and denied having re-loaded it; also submitted that Massey’s evidence ought not to be relied upon as he had been three times convicted. He was swearing their liberty away for the reward.

His lordship having very clearly summed up the case, said the question was, were the jury satisfied that the prisoners or either of them fired the gun with intent to murder the man, or whether it was not as likely that the shot was fired with the intent to prevent lawful apprehension. As to Smith, he did not fire the gun. It was said by Massey that there was no agreement between the prisoners as to fighting the gamekeepers. If the shooting was with a common purpose, Bingley’s hand was Smith’s hand; if not with a common purpose, or agreement, then Smith was not liable for Bingley’s act. This chiefly depended upon whether they considered that Smith used the words imputed to him, namely, telling Bingley to “look sharp and put the charge into him.” They would observe that only one person appeared to have heard the words, though there were several others near, and  Bingley  denied their use which was of importance as they did not affect himself.

The jury found the prisoner guilty of wounding, with intent to prevent lawful apprehension. Smith was sentenced to penal servitude for three years. The judge told Bingley that as his was the hand that fired the gun, if the jury found him guilty of the capital offence, he would have received a very heavy sentence, but, as it was, the sentence of the court would be five years’ penal servitude.